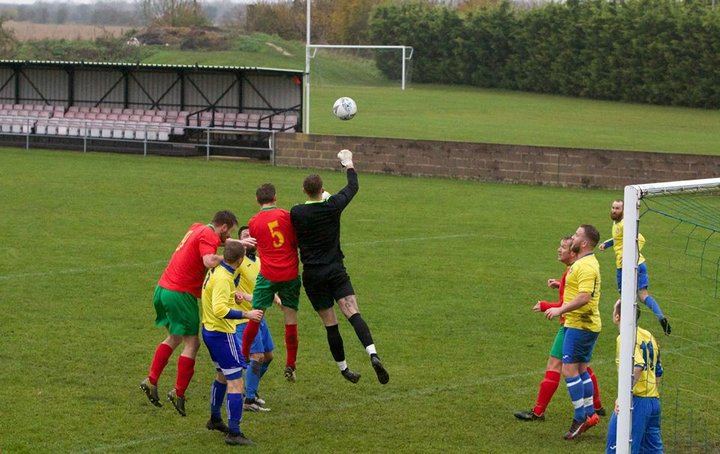 Teams joined together in harmony around centre circles across the county as players and officials paid their respects to His Royal Highness The Prince Philip, Duke of Edinburgh with early kick offs arranged to avoid the funeral.

The top two sides both dropped points as Group One tightened even further as the fixtures passed the halfway stage. Hailey benefitted from a Charlbury own goal to find the back of the net but Craig McCallum netted for Charlbury to keep them within a win of the top two as the points were shared.

Carterton Rangers missed the chance to move above Hailey as they also drew 1-1. Their opponents, Chadlington, continue to be nuisance opponents in Group One as they took points for the third time in four games. Matt Chadwick scoring for the visitors but Rangers levelled through Jamie Macdonogh who remain one point behind Hailey. Spartan Rangers are agonisingly close to the top two, missing out on goal difference as they edged Hook Norton in a five goal thriller. David Pryse elegantly skipped round a last ditch tackle and the advancing Hook Norton keeper before sliding the ball home to give Rangers the lead. Donny Henderson-Sowerby made it 2-0 on the stroke of half-time with a 30 yard effort from the touchline which sailed over the head of Lewis Harrison in the Hooky goal. Whether that was the intention when the ball left the boot, only the player himself will know. Hook Norton came out after the break knowing that scoring the third goal was crucial to salvaging something from the game and they did just that as Josh Hunt pounced to make it 2-1. Their joy was short lived however as a Rangers long throw caused problems in the Hooky defence and substitute Rhys Woodward found the ball hitting his foot and flying into the net, not that he knew too much about it. There was still time for Hooky to get back into the game and they threw lots of bodies forward to preserve their unbeaten record. James Ingham scored in the 80th minute to give them hope but a third goal evaded them and Spartan held on for a nervy win. Carterton FC have their first win at the fourth attempt, thrashing bottom side Minster Lovell 4-0. Carterton recorded four different goal scorers in the process with goals from Carl Austin, Will Smalldon, Alex Stubbs and Jason Lonsdale to keep Carterton’s hopes of qualifying for the semi-finals firmly alive.

It was a perfect 10 for Enstone as they thrashed Wootton Sports 10-0 to move to the top of Group Two. Jamie Gregory was the hat-trick hero on the day firing in three of Enstone’s goals. Josh Hunt and Tony Bott both scored a brace each with Jordan Godfrey, Andy McCabe and Nathan Bott all scored one each to take the tally to 10 in a crushing win. The win could prove crucial as goal difference could well decide who moves into the semi-finals.

Stonesfield followed up their midweek victory in far more comfortable fashion, defeating Witney Royals 7-1, as they moved into the top two at the expense of their opponents. Raffy Rice made it six goals in two games as hit four goals past Royals. Brother Carry Rice also got in on the goal scoring action and Liam Harris scored number seven in the rout. Corey Donohue hit a consolation for Royals but they slip to fourth as their goal difference took a massive dip. Milton hosted Carterton FC Reserves in a critical game in a bid to hold onto the coat tails of the top two. Milton prevailed by a solitary goal thanks to a Levi Steele strike as they jumped into third spot, level on points with Stonesfield. Carterton are now fifth but still only three points off the top two and have a huge fixture against Stonesfield on Wednesday night. Unfortunately, Hailey Reserves have had to withdraw from the competition, giving Bletchington a victory without kicking a ball and moving them onto six points with three games left to play.

Only two games in Group 3 at the weekend as Siege and Combe strengthened their hold on the top two places in the group. Combe gave their goal difference a healthy boost as they thumped Wootton Sports Reserves 7-1 to remain at the top of the league. Theo Flatman put Wootton on the score sheet but it was one way traffic as Combe netted through six different goal scorers. Theo Chalmers, Archie Hamilton, Dan Burgess, Rory Ward and Marcus Smith all scored one each, Louis Beresford scored a double to give Combe all three points and dump Wootton out of the competition.

Eynsham’s loss to Siege means their cup hopes are hanging on by their fingertips. Siege took the lead through a deflected Andy Makepeace goal and should have scored more but were wasteful in front of goal. Eynsham made them pay as Chris Baldwin equalised. Kev Lewis carried on his fine midweek form with another fine solo goal. Dancing his way past 5 or 6 players he slotted home to restore Siege’s lead before half-time. The second half was all Siege and they made their domination count in front of goal. Andy Makepeace scoring again after a fine team move before Lewis secured his brace, lashing home from distance to secure the points. Eynsham did grab one more back through Ben Kinchin but it wasn’t enough.

Cassington Rangers and Spartan Rangers Reserves couldn’t be separated as they played out an eight goal epic. Marcus Owsnett and Josh Walkington traded goals before Jason Blackman and Telmo Fernandes did the same. Fabio Fernandes hit a brace for Spartan but Gareth James hit his second brace in as many games to restore parity and send the team’s home with a share of the points Carterton Town B and Brize Norton lost their 100% records to each other as they had to settle for a point apiece in their fixture. Adam Davis scored for Brize but Nick Lister replied for Carterton. Milton Reserves have their first win of the competition as they overcame fellow winless side Chadlington Reserves. Max Sauvagnargues put Milton in front only for Brinley Mayne to pull Chadlington level. A point apiece would have done nothing for either side’s cup hopes but Francis Breaks fired home a winner for Milton to keep their cup dreams alive for the time being.

Hailey A have daylight at the top of group five after beating second placed Bampton United Reserves. Curtis Hathaway fired in a brace to get Hailey well on the way to victory. Lewis Townsend and Josh White fired Bampton back into the game but Luke Hessey and Connor Beveridge both scored once each to give Hailey the win and put them 3 points clear at the top of Group Five.

Brize Norton Reserves have their first win of the competition as they jumped up to third place following a 6-2 win over Kingham All Blacks Reserves. Six different goal scorers hit the net as Brize sauntered home with all three points. Paul Morrison, Joe Hatt, Lee Litton, Jon Goodman, Richard Duffy and Jason Hirschfield all scored once each. Alex Stringer and Olly Peters hit back for Kingham but couldn’t prevent themselves sinking to their third defeat. Leafield Reserves also have their first win of the competition with a comfortable win over Sherborne Harriers. A steady start to the game saw no goal but Leafield scored twice in 2 minutes to take control of the game. Following a scrambled defence from a corner, Charlie Hill was unfortunate enough to knock the ball into his own net and Henry Mullenger fired home to double their advantage. It stayed that way until the second half and although Sherborne started brightly in the second half, they found themselves three down after Chris Godfrey headed home from a corner. Sherborne were awarded a penalty which Josh Betteridge comfortably slotted home and Leafield’s nerves started to show as Harriers grew into the game. In fact, it should have been 3-2 but Betteridge missed an open goal from 7 yards as his header flew over the bar. Brian Wright was the man to settle the nerves for the away side though as his sumptuous 20 yard lob sailed over Ian Hepworth and into the far corner to make it 4-1 and secure the points for Leafield.

The top two are five points clear as Hook Norton Reserves and FC Mills both won again at the weekend to preserve their 100% starts. Mills defeated Aston Reserves 3-1 for their third win in three. Stu Cutts, Dan Hedges and James Rogers doing the damage for Mills. Reece Waine replying for Aston. Hook Norton Reserves went one better as they beat Stonesfield Reserves 4-1. Goal machine’s Mitchell Faulkner and Dom Hemmings both scored twice to give Hooky all three points. Sam Hibberd’s goal a mere consolation for bottom side Stonesfield. Spartan Rangers A and Chipping Norton Town drew a blank as they played out a 0-0 draw.