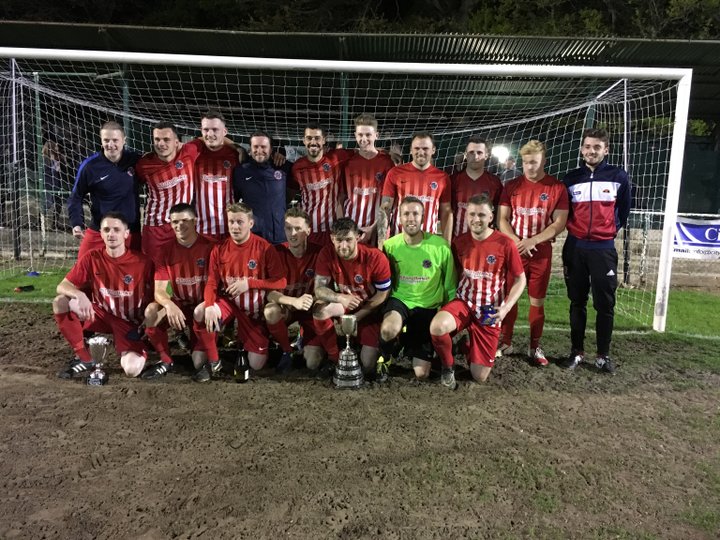 The much anticipated return of local men’s football arrived over the Easter weekend in the Witney and District and, along with everything else in life at the moment, adaptations had to be made to provide a competitive and meaningful end to the current season. 3 cup competitions, split into two groups for each cup, played in league format would be how the season would finish. The top two from each group then make up the semi-finals in each cup. The groups are pictured at the end of the report.

With the prolonged postponement of football, results were always going to be difficult to predict but Hook Norton showed no signs of rustiness as they got their cup campaign off to a flying start with a 5-0 thumping of Minster Lovell.

Star striker Jay Mair helped himself to a brace, Ben Morbey, Sam Prickett and Logan Mitchell completed the scoring as Hook Norton hit the summit after round 1.

Despite losing their goalkeeper to an early leg injury, Chadlington managed to still keep a clean sheet in their win over Carterton FC. The result caused a bit of a stir in Group 1, with Chadlington having previously been in Division One when the season ended, playing the former Premier Division league leaders. Alfie Peachey hitting the only goal of the game to give Chadlington the best possible start.

Hailey were made to work for their 3 points but eventually got there thanks to a late winner from Moh Semlali. Their game against Carterton Rangers looked destined for deadlock as the game moved into its final stages, only for Semlali to break Rangers’ hearts and steal the three points.

Charlbury recorded their first win against Premier Division opposition all season, safely despatching Spartan Rangers in their game at Nine Acres. Regular goal scorers Michael Hayes and Jacob Hancocks found the net once each and Felix Robertson hit their third in a comfortable 3-0 win.

Lee Spencer smashed in four goals as he helped Wootton Sports rout Witney Royals 5-1. Ryan Harris hit back with a consolation for Royals with Jamie Hutton notching Wootton’s fifth goal to give them a dream start to life in Group 2.

Stonesfield sit pretty at the summit thanks, in part, to a Raffy Rice hat-trick as they comfortably overcame Bletchington. Bletchington’s poor discipline and timing inside their own box contributed to their downfall as Mike Phipps slotted home two penalties during the game and despite Richie Wells and Joe Brewer getting Bletchington back into the match with a goal each, Liam Harris hit goal number six to cement their victory and leave Stonesfield top on account of goals scored.

Milton defeated Enstone to ensure that all home teams won in Group 2 this week. Rhys Warner-Carter scored for Enstone but his goal was cancelled out by Levi Steele. Stephen Pearce then bagged a brace to give Milton a 3-1 lead and that’s how the game finished.

An eight goal thriller made the headlines for the Junior Cup as Eynsham narrowly defeated North Leigh. In a back and forth encounter, which saw both teams battle hard for the points, ever reliable

John Ayres managed to score twice to help Eynsham into the lead. Stephen Chappell scored from the spot but North Leigh weren’t to be outdone as Liam Varney hit back with a brace of his own. Andy Stratford scored for Eynsham only for Robbie Wyatt to drag North Leigh back into the game once more. Eventually, Chris Baldwin’s effort returned the gap to two goal and that’s how it stayed as Eynsham ran out 5-3 winners.

Another goal fest at Carterton Rec where Siege FC hosted Wootton Sports Reserves in their Junior Cup encounter. Dave Cartwright gave Siege the lead but Wootton showed they were up for the fight as Jacob Cooke fired home a 25 yard screamer to restore parity. Siege hit back instantly as Gez Morgan fired them back in front straight from the kick off. After that Siege stretched their advantage thanks to a goal from Will Griffiths and as Cartwright scored his second, Siege looked comfortable. Cooke slotted home a penalty to reduce the deficit and whilst Wootton threatened to pinch a draw, Siege held on for all three points.

In the only other game Combe overcame Aston 2-0. Kai Paton slotted home for the lead and Aston compounded their own misery by putting the ball into their own net for Combe’s second.

Carterton Town B top Group 4 after a hard fought win over Spartan Rangers Reserves. Carl Ford fired Town in front, with pacey Tahir Alam firing home their second. Nick Lister pulled one back for Spartan to give them hope of a point However, Town sealed victory with a third from Daz Craig to secure the 3-1 win.

Brize Norton made a winning start to their Junior Cup campaign with a 2-1 win over Milton Res. Harry Nolan scored for Milton but his strike was cancelled out by Ryan Weston. Dan Leverton’s strike was enough for Brize to leave with all three points.

Cassington and Kingham couldn’t be separated after 90 minutes in their Junior Cup tie. Cassington dominated the first half but were guilty of not putting away their chances. Eventually Tyler Walker did find the net and although Cassington missed a penalty, they went into the break a goal to the good. Whatever was said by the Kingham team at half-time worked because they came out rejuvenated in the second half and made a real game of it. Dan Lay eventually brought Kingham level and whilst there were chances at both ends to win it, none could be taken and both sides left with a point apiece.

Hailey A were the biggest winners of the weekend with an 8-0 victory over Leafield Reserves. It wasn’t an easy start for them as Leafield fronted up to the challenge in the opening quarter. Hailey were wasteful in front of goal too but eventually Curtis Hathaway broke the deadlock after 28 minutes. Ryan Stockford opened his account and Hathaway notched his second to send Hailey in three up at half time. An early penalty was despatched by Hathaway in the second half to complete his hat-trick. It was then the turn of Henry Macke to score two beauties in the space of 10 minutes. First, after Leafield failed to clear their lines from a corner, Macke showed off his athletic abilities to power home an overhead kick into the far corner and shortly after fired home a perfectly timed volley past the despairing keeper. Two smart saves from keeper Gianni Cascone kept Leafield off the scoresheet. Darren Tasker and Will Jeffrey then completed the scoring for Hailey who have a comfortable goal difference to start the tournament with.

Witney Royals Reserves managed to beat Kingham All Blacks Reserves by the odd goal in five to take second place in the table. Olly Nolan and Elliot Major scored for Royals but they were cancelled out

by goals from Jake Godfrey and Liam Barnes for Kingham. Nolan’s second goal proved to be the difference maker as Royals won out 3-2

Brize Reserves were left to rue a missed penalty as they ended up sharing the spoils with Sherborne Harriers. It ended up finishing 2-2 as Jacob Hambridge and Joe Hatt both scored for Brize. Corey Cullen’s brace for Sherborne meant that the penalty miss proved crucial as the points were shared at the final whistle.

Game of the weekend looks to have taken place at Aston as Aston Reserves hosted Hook Norton Reserves in a nine goal thriller. Damien Corbin put Hook Norton in front only for Ash Edwards to equalise. Aston then took the game by the scruff of the neck and extended their advantage. Max Hazell scored for Aston and Edwards scored twice more to complete his hat-trick. In the 80th minute, Aston led 4-1 but Hook Norton’s never say die attitude has been ever present this season and so it proved again this time. Goals from Dom Hemmings, Harry Prickett, Jake Robinson, and a second from Damien Corbin saw a frantic end to the game as Hook Norton somehow snatched victory from the jaws of defeat in a 5-4 win.

Chipping Norton Town opened up their campaign with a win over Leafield. It was a tale of the two George’s as George Kay and George Knight both scored once each in the 2-0 victory. The opening three points puts Town second in the table at this early stage.

Top spot is occupied by Spartan Rangers A after a 3-1 victory over Stonesfield Reserves. Mike Hole and Will Watts put Spartan in control only for Tom Wilson’s goal to drag Stonesfield back into the game. But a point evaded the visitors as James Macke scored Spartan’s third to secure all three points and grab top spot in the process.